An air of calm has descended on Parliament House ahead of the next sitting week.

World renowned yoga guru Swami Baba Ramdev has led a group meditation in Queen’s Hall as part of a presentation he made to parliamentarians and community members during a visit to the Victorian Parliament. 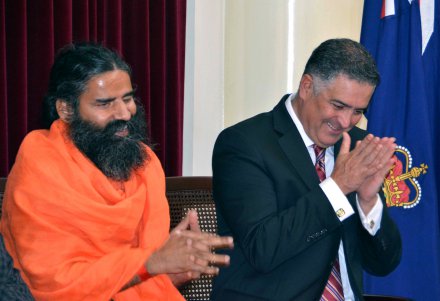 Welcoming the Swami to Melbourne, Speaker of the Legislative Assembly Telmo Languiller paid tribute to his dedication to yoga, meditation and spirituality.

Mr Languiller said the Swami is recognised throughout the world for promoting the well‑being of mind, body and soul. 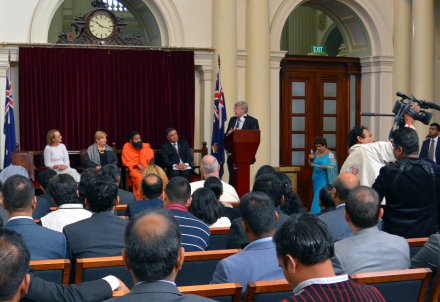 President of the Legislative Council Bruce Atkinson echoed the sentiments, saying that never before has it been so important to listen to those who support peace and harmony in our communities through spirituality.

While remarking that he personally finds some yoga poses impossible to achieve, Mr Atkinson acknowledged the Swami’s focus on values and respect for other people.

“We should never to be too busy to consider spirituality issues, and the opportunities to create a better world by making sure that we address those relationships to other people that are so much a part of the Swami’s teachings.” Mr Atkinson said 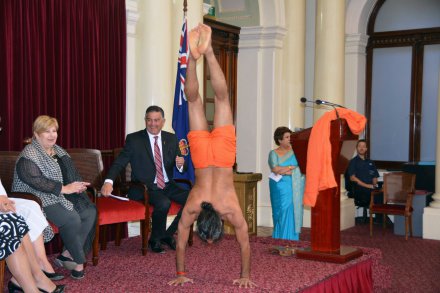 Emphasising the relationship between mind, body and spirit, Swami Baba Ramdev spoke about his daily yoga practice, which he has carried out since the age of nine.

He demonstrated the simplicity of the practice that everybody can achieve, including through stress-reducing breathing exercises and the sun salutation. Coupled with meditation, the benefits, he said, are life enhancing.

“Simple yoga breathing exercises that anyone can do are enough to reduce stress and tackle all diseases. It is my strong belief that one day all the people in the world will be practising yoga and spirituality,” he said.

Swami Baba Ramdev is renowned for popularising yoga through his mass yoga camps across India and abroad. He is a leading campaigner for simple living and community empowerment. 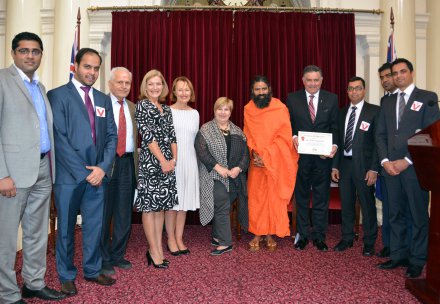