Does Detroit’s experience with the decline of its manufacturing industry have any lessons for Victoria?

That’s the focus of the new research paper titled, 'Detroit: What Lessons for Victoria from a ‘Post-Industrial’ City?', released today by the Victorian Parliamentary Library.

The research paper has been prepared by 2015 Parliamentary Library Fellow, Dr Tom Barnes, from the Australian Catholic University in Melbourne.

It presents the findings from a recent visit to the United States, where he studied first-hand how the city of Detroit has sought to reinvent itself following decades of deindustrialisation and depopulation.

The research paper has been presented to Victorian parliamentarians at a seminar held in the Parliamentary Library.

Dr Barnes is an economic sociologist, with a background in political economy and development studies. He forms part of a team of academics at the Australian Catholic University currently engaged in a research project called ‘Cities and Successful Societies’ which examines the impact of social and economic changes on happiness and well-being. 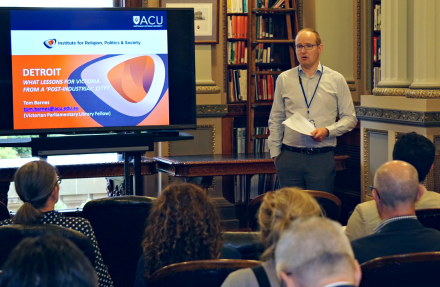 Library Fellows are invited to deliver forums and papers of topical interest to members of parliament.