The report was tabled in Parliament on 7 September 2017. 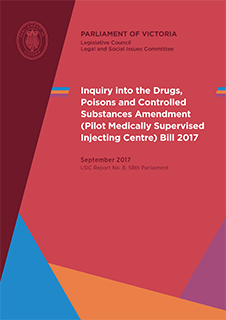 The Committee called for submissions in March-April 2017.

If you have any questions about the inquiry, please contact the Committee secretariat or email lsic@parliament.vic.gov.au

The followings submissions have been accepted by the Committee:

Information on the Committee's public hearing schedule for this Inquiry will be posted here as it becomes available.

Corrected transcripts of these hearings will also be published here when finalised by the Committee.

On 22 February 2017, the Legislative Council agreed to the following motion:

That this Bill be referred to the Legal and Social Issues Committee for report, no later than 5 September 2017, on a review and consideration of the —