The Chamber of the Legislative Council is home to both historical pieces of furniture and many unique architectural features, which compose an impressive example of Australian materials, design, and manufacturing. 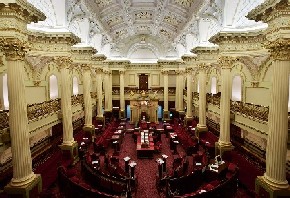 Red is the principal colour for furnishings and fabrics throughout the Legislative Council Chamber, reflecting the customs of the Parliament of the United Kingdom - specifically, the House of Lords. The use of red, found in the Upper Houses of most parliaments in the Westminster tradition, is attributed to the status of red as a royal colour, and its consequent use in the room where the King or Queen would meet with Court nobles. Each of the columns within the Chamber is a single piece of Tasmanian freestone. The Chamber’s woodwork is of polished cedar brought from Queensland and northern New South Wales. 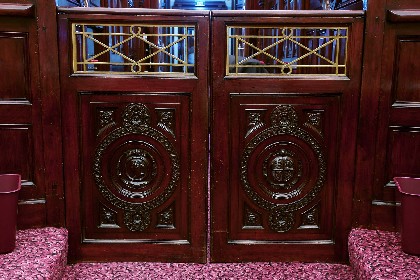 The elaborately carved gate located near the entrance to the Chamber facing the President’s chair is referred to as the ‘Bar’. It is the point at which no visitor may cross and enter the Chamber unless invited by the House.

In parliamentary history, the Bar has been the place to which individuals have been brought to allow the President to question or admonish them. In theory, a person may be brought to the Bar of the House to receive thanks or to provide information or documents.

It is also a place at which Legislative Assembly Members stand when the Assembly is summoned to the Legislative Council Chamber to hear the Governor’s Speech at the Opening of Parliament.

The Vice-Regal Chair is a cedar chair which dates from the late nineteenth century (pre-1886) and is upholstered in maroon buttoned velvet. It is used for the Opening of Parliament when the Governor is in attendance. The Vice-Regal Chair was also used on one occasion when Queen Elizabeth II opened the 39th Parliament in 1954.

The table which sits in the middle of the Chamber was made in 1857 by the Australian manufacturer Nation and Lindsay. Copies of all Victorian Statutes are kept on this table.