Information Sheet 14 - A Sitting Day in the Legislative Council

The Legislative Council’s days and hours of meeting

Although the House's hours of meeting can vary, particularly in terms of finishing times, the usual sitting times are as follows:

How a Sitting Day commences

Each day in a sitting week is structured slightly differently, both in terms of the House's hours of operation and routine of business.

The following chart provides a colour coded break down of the major elements of each sitting day of the week: 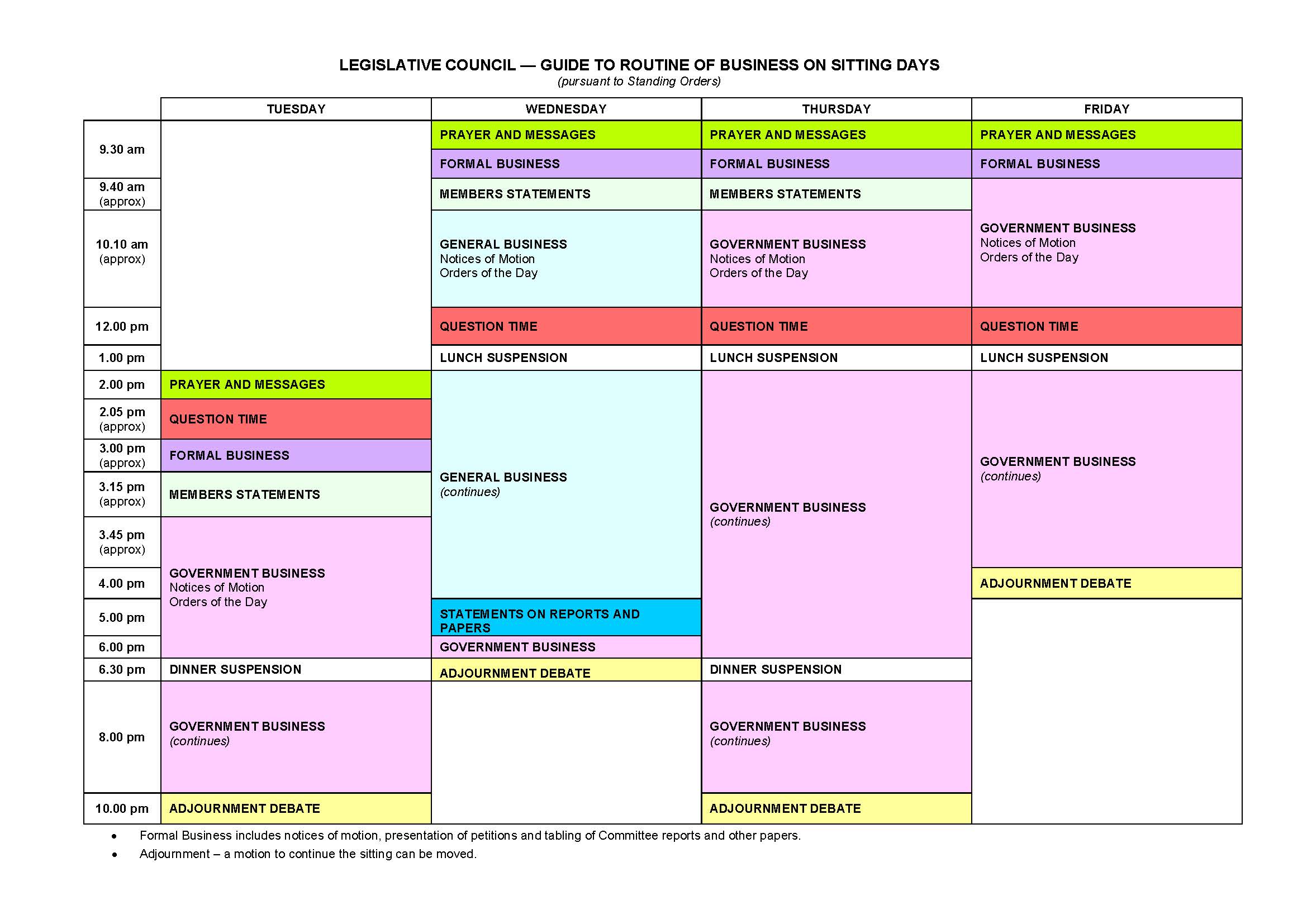 Formal Business commences on a Tuesday after Question Time and follows the reading of Messages on a Wednesday, Thursday and Friday. Formal Business includes the:

The President will first ask if there are any petitions for presentation. Petitions provide a direct means by which any citizen or group can express a concern to the Parliament. Petitions need to be lodged for presentation in the House by a Member. However, the Member who presents the petition does not necessarily agree with its content. The President will also ask if there are any notices of intention to make a statement on a report or paper tabled in the Council (see below for details).

The President then asks if there are any Bills for introduction, by leave. Leave (the House's permission) is required to enable Bills being initiated in the Council to be introduced without notice. A Member would then present the Bill and move that it be read a first time. Alternatively, notice can be given regarding the introduction of a Bill which will then be given its first reading on a subsequent day.

Papers are then tabled in the following order:

The President will finally ask if there are any notices of motion, which are motions for new items of business to be placed on the House's Notice Paper (agenda). A notice must be presented in written form to the Table, signed by the Member and include a proposed day on which he or she plans to debate the motion. The Notice must also be read out aloud by the Member.

Following Formal Business on Tuesday, Wednesday and Thursday, up to 15 Members a day may make a statement for a maximum of 90 seconds on any matter of concern or interest. Members are limited to making one statement each sitting week, unless a fellow Member assigns his or her entitlement to another, who may then speak again, provided that he or she has not already made a Members' Statement on that same day. Each party is limited to a maximum of 50% of potential statements each sitting week.

Statements on Reports and Papers

On Wednesdays at 5.00 p.m. up to 60 minutes is set aside for Members to make statements on a report or paper which has been tabled in the House. Members must give at least one day's notice of their intention to make a statement. The reports or papers proposed for discussion each Wednesday are listed on the Notice Paper. Members are limited to a maximum of five minutes when making such statements.

Questions without notice commence at 2.00 p.m. on Tuesday and at midday on Wednesday, Thursday and Friday. It is the current practice of the House for ten questions to be asked each Question Time (five from the government side and five from non-government Members). On average Question Time lasts between 45 minutes and one hour.

At the conclusion of Question Time, a Minister, usually the Leader of the Government, advises the House of answers to Questions on Notice and presents them to the House. Under the Standing Orders, Ministers are required to provide a written answer within 30 calendar days of the question being submitted.

For further information regarding Questions without Notice and Questions on Notice see Information Sheet No. 3: ‘Questions'.

Government Business concerns Bills or motions which have been initiated by members of the Government party and often takes up more than half of the Council's time during most sitting weeks. (For an indication of when Government Business is likely to occur, see the chart above.)

If the House wishes to examine the Bill's clauses in detail, the Bill may be referred to:

The third reading stage is usually a formality and rarely includes further debate. If such debate does occur, it is limited to the specific content (rather than general principles) of the Bill. For further information regarding the passage of a Bill see Information Sheet Number 10: ‘Bills’.

The Adjournment debate (i.e. debate on the motion “That the House do now adjourn”) provides a forum for Members to raise matters of concern related to Victorian Government administration. Unless a Minister has already moved either a motion to extend the sitting of the Council or to adjourn early, the President interrupts business at 10.00 p.m. on Tuesdays, Wednesdays and Thursdays to allow the Adjournment debate to commence.

A maximum of 20 Members can raise matters on the Adjournment debate on Tuesdays, Wednesdays and Thursdays, and only 30 minutes can be spent on the Adjournment debate on a Friday. Each Member's time to raise an issue is restricted to three minutes, and Members are allowed to raise only one matter during the Adjournment debate each sitting week, although they may give up their right to speak so that another Member may speak in their place. No time limits apply to a Minister's response, although Standing Orders do require that they be ‘as brief as possible'. In practice, responses are usually relatively short anyway, either promptly addressing the issue or advising that the matter will be referred to the relevant Minister. Once all matters have been dealt with, the House is adjourned, which is signalled by three short rings of the Division bells.

Recording and Transmitting the Council's Proceedings

All that happens in the House is documented. The official record of the Legislative Council's proceedings is the Minutes of Proceedings. The Clerks record the Minutes, noting all formal actions and decisions made in the Chamber as the House proceeds through its business. At the conclusion of the day, a ‘proof version' is published in print and electronic format for circulation.

For further information regarding the Minutes see Information Sheet No. 5: ‘Minutes of the Proceedings'.

On each sitting day, there are audio transmissions of the Council's proceedings to certain offices at Parliament House. Proceedings may also be recorded (sound and/or visual) by people or organisations outside of the Parliament subject to the Legislative Council's Standing Orders relating to the transmission and broadcasting of the proceedings. In 2008 the proceedings of both Houses began being broadcast over the internet in audio form, and since the beginning of the 57th Parliament in December 2010 video of both Houses is broadcast over the internet when Parliament is sitting. Video broadcasts are accessible via the Parliament of Victoria website.