Information Sheet 9 - The Opening of Parliament

The Opening of a Session of the Victorian Parliament is a colourful occasion. The ceremony is based on parliamentary traditions and practices emanating from the United Kingdom's Parliament which is opened by the Queen. In Victoria, the Queen's representative, the Governor, performs this function. The current Governor is Her Excellency, Ms Linda Dessau A.C. She succeeded the previous Governor, His Excellency, Mr Alex Chernov, A.C., Q.C. The Governor's speech is an important feature of the Opening ceremony as it outlines the Government's proposed legislative program for the Session. The Opening ceremony is also significant as it is the only time the three central elements of the Parliament –– the Governor representing the Crown, the Legislative Council and the Legislative Assembly –– undertake parliamentary duties in each other's presence.

Her Excellency the Hon. Linda Dessau, A.C., Governor of Victoria

When is an Opening of Parliament held in Victoria?

An Opening of Parliament is always held on the first day the two Houses meet following a general election. An Opening may also be held during the period between elections if Parliament is 'prorogued', which means that the Governor issues a proclamation ending the current Session and suspending all business. A Parliament can consist of one or more Sessions, depending on whether there is a prorogation.

The reasons for prorogation are varied. Traditionally, a new Session of Parliament commenced at the start of every year, although this has now become less common. In recent years, prorogation has occurred due to governments' desire to 'wipe the slate clean' mid-term. Prorogation can be an opportunity for a government to re-assess its legislative program or to re-introduce a Bill that has already been considered by the Parliament in that Session. Until recently, both Houses' rules of procedure, the Standing Orders, prevented a Bill or proposal already resolved by the Parliament from being discussed again in the same Session. The Legislative Council has since amended their Standing Orders to allow a bill to be reintroduced after six months has lapsed since it was first introduced.

What guidelines govern the Opening of Parliament?

The procedures governing an Opening of the Victorian Parliament are based on several sources. The Victorian Constitution (Constitution Act 1975), the two Houses' Standing Orders, May's Parliamentary Practice (a procedural manual which is used by Westminster-style parliaments throughout the world) and parliamentary convention (unwritten rules that have developed over time to govern the Parliament's operation) all contribute to the way the Opening of Parliament proceeds.

What actually happens on the day?

When there is a new Parliament, the swearing in of Members constitutes the first part of the day. The proceedings begin with the ringing of the bells summoning Members to their respective Chambers. A Proclamation convening Parliament is read by the Clerk. In each House Members are then joined by a Commissioner who has been appointed by the Governor. The Commissioners are usually senior members of the Victorian judiciary.

The Chief Justice announcing the Commission from the Governor

The Commissioner then swears in the Legislative Council Members. The Members can elect to be sworn in by taking and oath of allegiance or taking an affirmation of allegiance. An oath has religious significance while an affirmation does not. The Constitution (section 23) requires a Member of either House to take an oath or affirmation of allegiance to the Crown before they sit and vote. In the Legislative Council, the Members electing to take the oath are sworn-in in groups, followed by the group making an affirmation. Each Member then signs the Roll at the Table and shakes hands with the Commissioner. Following the completion of this stage, the Commissioner attests the Roll and then, preceded by the Usher, withdraws from the Chamber.

Election of the Presiding Officers

The Council Members then proceed to the election of a President. This process begins with the Clerk calling for nominations. A Member will then address the Clerk and propose a candidate to be President. If only one Member is proposed and seconded, and the House agrees, the Member is taken by the proposer and seconder to the President's Chair.

The method of electing the President, when more than one Member is proposed, has changed following the adoption of new Standing Orders in 2006. Previously the President was elected by a Division, whilst now an open vote is held. The open vote operates with the Clerk announcing the name of each candidate in turn and asking Members who support the candidate to stand in their place. All Members in the Chamber must vote, but are only entitled to vote once. The candidate with the most votes is elected President.

Traditionally a newly elected presiding officer resists being escorted to the Chair. This practice arises from the conflict between the Crown and the Parliament in Britain in the 15th and 16th centuries, when the presiding officer was responsible for conveying messages and demands to Monarchs which were sometimes poorly received.

Upon taking the Chair, the President reads the Lord's Prayer, and oversees the election of a Deputy President. The President then informs the Council of the time that they will present themselves to the Governor, and the House subsequently adjourns until the afternoon's ceremony.

A formal procession signifies the start of the next stage of the proceedings. The Governor leaves Government House and travels to the carriageway at Parliament House's front steps where he is greeted by the Usher of the Black Rod.

The Governor then receives the Royal Salute and inspects a Guard of Honour and ceremonial band. In 2006 and 2010, the Guard of Honour and band consisted of officers from Victoria Police. At previous openings these roles had been performed by representatives of the three services (Army, Navy and Air Force) of the Australian Defence Force. 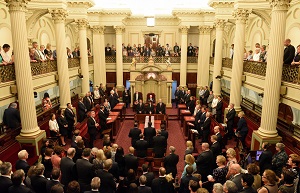 The Usher announcing the Governor’s arrival 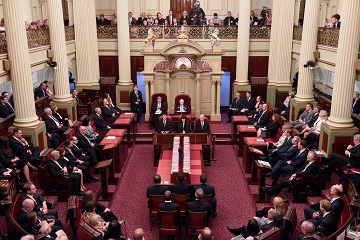 The Governor reading the Opening Speech

At recent Openings, the Governor has also been greeted by representatives of the traditional owners of the land upon which Parliament House stands. The welcome consists of a smoking ceremony, the ceremonial handing over of plant totems and the presentation of a possum skin cloak to the Governor.

A meeting of the Executive Council (comprising current Victorian Ministers who advise the Governor in exercising his various powers) is then held in the Parliamentary Library, where the Governor approves the speech he will deliver later that day. While this is taking place, guests such as judges, religious leaders, government officials, parliamentarians' families and members of the public assemble within Parliament House to view proceedings.

Following United Kingdom precedent, the ceremony takes place in the Upper House. The Usher of the Black Rod announces the Governor's arrival and invited guests stand to acknowledge the Governor's presence. The Governor sits in the Vice-Regal Chair at the head of the Chamber, underneath the Council's gold canopy. During the Council's normal meetings, this Chair sits behind the President's Chair and is roped off as it is only intended for use by the Crown or its representative.

The practice of shutting the doors to the Lower House in the Usher’s face and requiring him to knock three times has frequently, and incorrectly, been attributed to the attempt by King Charles I to arrest five Members of the House of Commons for treason in 1642. It should be noted that it was the Serjeant-at-Arms and not the Usher of the Black Rod that had been sent to make the arrest. The actual origins of this ceremony are less dramatic and began before this event took place. The House of Commons first took offence in 1628, when they were summoned to attend the Sovereign but the Black Rod did not bring the message himself. In 1641, the Usher entered the House of Commons with a message, but without his Black Rod and before he was invited. The House took exception to both and from this time on required the Usher to knock three times and wait for admission to the House.

Each House has the opportunity to formally reply to the Governor's speech in what is known as the "Address-in-Reply". This debate is usually wide-ranging and any matter that falls within the ambit of State Government administration may be discussed. At the conclusion of the debate, which may take several weeks, each House passes a motion agreeing to the Address-in-Reply. The presiding officer of each House, accompanied by its Members, then formally presents each Address to the Governor.

Why does the Governor open Parliament?

The Queen is formally Australia's Head of State. She is represented by the Governor-General of the Commonwealth of Australia and the Governors of each of the six States.

The Governor, as the Queen's representative in Victoria, exercises the Crown's constitutional powers in this State. Under Victoria's Constitution, the Crown is one of the three central elements (along with the Legislative Council and the Legislative Assembly) of Victoria's parliamentary structure. The Constitution gives the Governor powers such as determining the period within which a Parliament meets and the date of its dissolution. Although, in practice, the Governor acts on the Executive's advice, technically the Parliament's opening is at the Governor's prerogative. Therefore, the Governor is a central figure in the Opening Ceremony and is the person who formally declares the Parliament open.

In February 1954, Queen Elizabeth II made her first visit to Melbourne. The 39th Parliament of Victoria had earlier been prorogued to allow for the Queen to formally participate in an Opening of Parliament. The opening of a Second Session was the only way this could be done mid-way through the Government's term.

An estimated fifty thousand people gathered outside Parliament House to welcome Her Majesty who, accompanied by the Duke of Edinburgh, was formally met by the Usher of the Black Rod. After passing the guard of honour, the Queen was led into the Legislative Council Chamber where she spoke the traditional words: 'Mr President, I desire the attendance of Mr Speaker and Members of the Legislative Assembly in the Legislative Council Chamber.' All Members, as well as various dignitaries, gathered to hear her read out a short speech declaring open the Second Session of the 39th Parliament of Victoria.