Who are the Legislative Council’s Chamber Officers? 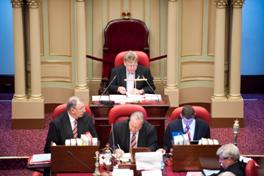 Former President of the Legislative Council,
The Honourable Bruce Atkinson, MLC,
with the Clerks in the foreground.

The four senior officers of the Department are:

When the Legislative Council is meeting, the officers sit in their respective places at the (centre) Table. They provide advice to Members concerning parliamentary practice and procedure, and also formally record the proceedings of the Council. These responsibilities confer on them the title of ‘Chamber or Table Officers’.

The Clerk is the Legislative Council’s most senior parliamentary officer and is the principal apolitical advisor to the President and Members on the House’s rules, practices and procedures. The Clerk must ensure that all business conducted in the Chamber meets statutory and procedural requirements. When a Bill (proposed legislation) has completed its passage through the Legislative Council, it must be certified by the Clerk. The Clerk is also responsible for the accuracy of the Minutes of the Proceedings, the formal record of the Council’s decisions and proceedings.1

The Deputy Clerk, as deputy Department Head, assists the Clerk in his responsibilities and deputizes for him when required. When the House is sitting, the Deputy Clerk assists in providing procedural advice to the President and Members. He is also responsible for recording the proceedings on each sitting day, published as Minutes of the Proceedings.

Outside the Chamber, the Deputy Clerk is responsible for the day to day management of the Department of the Legislative Council. His responsibilities encompass a range of operational matters including departmental finance, administration and staffing.

During sittings of the Council, the responsibilities of the Assistant Clerk Procedure include assisting with the preparation of the Notice Paper and Minutes of the Proceedings, and recording the proceedings of the Committee of the whole.

Under direction from the Clerk, this Officer provides assistance in the day to day administration of the Department.

As Assistant Clerk Procedure, this Officer oversees the Table Office which provides procedural, research, writing and administrative support to the Legislative Council, the President, and other senior officers of the Department.

When the House goes into the Committee of the whole (a procedure to examine a Bill in detail), this Officer provides advice on practice and procedure to the Deputy President. It is his responsibility to take the Committee through the Bill clause by clause when this stage of the Bill examination process occurs. The Assistant Clerk Procedure is also responsible for the Opening of Parliament.

The Assistant Clerk Committees supervises all of the committees for which the Department is administratively responsible and any select or standing committee established by the Council.

The Assistant Clerk Committees is responsible to the President for the oversight of the operations of the committees, Executive Officers and committee staff whose role is to provide administrative, research, procedural and budgetary support to each committee.

The shift towards a less formal dress code in the Chamber is illustrated by the change in dress style of Legislative Council Table Officers. Until recently, the Clerks wore traditional Windsor Court dress consisting of a long coat, waistcoat, winged collar, barrister’s bib, wig and gown. On ceremonial occasions the Clerks would also wear black knee breeches, silk stockings and ecclesiastical shoes with silver buckles instead of their black trousers.

Changes in August 2000 saw the Clerks in black suits, white shirts and burgundy ties, with the gowns and wigs being retained. This modification followed similar moves in recent years in almost all other Chambers in Australia.

The adoption of a more informal parliamentary dress code was further extended in February 2003, with the Clerks no longer wearing wigs. However, the Clerks continue to wear a hint of traditional dress in the form of the black gown worn over a black suit.

Today, the Usher, who is also an Assistant Clerk, wears identical dress to the Council’s other Table Officers.

Current attire for the Usher

Previous attire for the Usher

History of the Offices

The offices of Clerk and Deputy Clerk of the Victorian Legislative Council are based on British precedents. The first appointment of an official to record proceedings and provide administrative support to an assembly which was a forerunner of the British Parliament dates from 1315.3 In 1363, the Commoners was seen as sufficiently distinct from the Lords for the King to pay a Chancery Clerk to serve the Commons only. The work of the Clerks at this time was quite influential as they had a direct role in deciding how the assembly went about its business. The need for an assistant to the Clerk was formally recognised from 1640.

Following the English Civil War in the mid-seventeenth century, the Clerks’ status changed and the provision of impartial procedural expertise became more important. It was not, however, until the appointment of Sir Thomas Erskine May early in the nineteenth century that the characteristics of modern Clerkship gradually became established. During his tenure, May edited nine editions of his work Parliamentary Practice. This text is still used as a procedural manual in Westminster-style parliaments throughout the world, including the Victorian Parliament.

When the first Victorian Legislative Council was formed in 1851, a Clerk was appointed. In an age when Members were not paid, this Clerk was given an annual salary to ensure that papers were kept to the appropriate legal standard.2 In 1856, following the establishment of responsible government with two Houses of Parliament to govern Victoria, Clerks were appointed for both the Legislative Council and the Legislative Assembly.

Throughout the Victorian Parliament’s history, dedication to parliamentary service has been a strong characteristic of those appointed to the office of Clerk. Only fifteen people have served the Legislative Council in the position of Clerk since 1856. Frequently, appointment to the position of Clerk of either House has been the culmination of a long career working within the Parliament. Political impartiality is a strong feature of today’s office of Clerk.

This position is also based on an English tradition: the existence of a ‘Gentleman Usher’ can be traced back to 1348. The first Usher led the King and knights to various ceremonies and events, and controlled access to their meetings by guarding the doors. A Black Rod has been in use in England since 1361 and symbolises the authority of the position.

The Usher took charge of maintaining order within the House of Lords from the sixteenth century and, by the nineteenth century, had the power to admit or exclude people from that House. The Usher also had responsibility for maintaining order in the precincts of the House. He served as Secretary to the Great Lord Chancellor, supervised accommodation arrangements and security, and participated in ceremonial events.

The Victorian Parliament followed this model with the Office of Gentleman Usher being created in the mid 1850s. A Black Rod was not used in Victoria until 1952 and its introduction resulted in a name change from ‘Gentleman Usher’ to ‘Usher of the Black Rod.’

The Usher is a central ceremonial figure at Openings of Parliament. At the opening of each Parliament, the Usher approaches the Legislative Assembly Chamber and knocks three times on the door with the Black Rod to announce a message from the Governor inviting Assembly Members to visit the Council. The Serjeant-at-Arms then leads a procession of the Speaker and Legislative Assembly Members and Chamber Officers into the Council Chamber where the Opening Ceremony takes place.3 The 1.3 metre long Black Rod is a symbol of the Usher’s authority and is carried at ceremonial events and when leading the President into the Chamber at the commencement of each sitting day. When the House is meeting, the Rod is placed at the Table of the Legislative Council.