Information Sheet 5 - Minutes of the Proceedings

All items of business considered by the House during its sitting day appear in the Minutes in the order in which they were addressed.

The Minutes are not a detailed account of proceedings but a concise journal of the day's business. Therefore, the Minutes may note that Questions Without Notice were taken, but no details of what questions were asked, and to whom they were directed, are included.

Who prepares the Minutes? 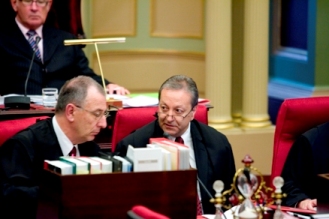 The Deputy Clerk (right), with the Clerk (left), taking the Minutes in the 57th Parliament

The Minutes are recorded by the Clerks in the Chamber as the House proceeds through its business each day. At the conclusion of the sitting day a ‘proof version’ is printed for circulation to Members, Officers of the Parliament and to the public. If any errors are found in this copy, they can be corrected before the final version goes to print. Standing Order 16.06(2), for example, allows for any errors in recording votes during a division to be corrected in later versions of the Minutes. Standing Order 19.02 also states that the publication of proceedings may be restrained by the Council at any time, although there is no record of this procedure having been invoked by the Legislative Council.

A weekly version of the Minutes is produced and checked and contains all the Minutes of each sitting day that week and, where applicable, including a supplement related to proceedings in Committee of the whole. Finally, at the end of each parliamentary session, the Minutes are bound, along with the Notice Papers, in what is known as the Minutes of the Proceedings Bound Volumes.

History of the Minutes

Most of the documentation methods currently used by the Parliament of Victoria are modelled on practices established in the British Parliament. The Clerk Assistant in the House of Lords keeps a record of business called the Minutes of the Proceedings. This, together with a series of papers including the business planned for the next sitting day (Notices and Orders), is referred to as "the Minute". In the House of Commons the daily working documents are collectively known as "the Vote". This also refers to the record of the day's business and what is scheduled for future days. When the Victorian Parliament was established, the record of what happened each sitting day (Minutes of the Proceedings) as well as what was scheduled for future days (Notices and Orders of the Day) were produced in the one document known as the Votes and Proceedings of the Legislative Council.

While all parliaments within Australia have adopted the general procedures of the Westminster system, different terminology and methods have developed. Thus, the Upper House of the Commonwealth Parliament uses the title Journals of the Senate to refer to its record of proceedings, while the House of Representatives has retained the title Votes and Proceedings. The other State parliaments also use a variety of expressions to describe the documentation of their proceedings.