At the heart of Westminster-style parliamentary democracy is the system of responsible government. Under this system, the Government is responsible collectively to Parliament and requires its ongoing support to remain in office. Ministers are, in turn, responsible individually to Parliament both for their own performances and those of their departments. This is the system of government that all Australian legislatures, including Victoria’s Legislative Council or Upper House, inherited from Britain.

To enable Parliament to keep the Government accountable and responsible, it is essential that it has access to information that will enable it to scrutinise Ministers’ management of their portfolios. One of the ways in which this can be achieved is through formal processes for asking questions.

In Victoria’s Legislative Council (and in the Lower House, the Legislative Assembly) these processes fall into two categories: questions on notice and questions without notice. The former category consists of written questions which are placed on the Council’s Notice Paper (its agenda of business) and seek a response from the Minister at a later time. Questions without notice are asked verbally during Question Time, which is a period set aside during the Council’s proceedings each sitting day. Question Time not only provides the Opposition with an opportunity to obtain information, but enables it to test Ministers in an intense, public forum; therefore, it is an important element in the political contest between the Opposition and the Government.

The origins of asking questions to obtain information or press for action arise from Westminster. It is generally accepted that the first recorded question occurred in the House of Lords in 1721. The procedure for asking questions developed slowly in the House of Commons, with the practice of giving a Minister notice of a question by printing it in the Notice Paper, which began in 1833. Questions on notice were therefore an increasingly common feature of the British House of Commons’ proceedings when the Victorian Parliament was established in 1856. As the Victorian Parliament’s rules and conventions were modelled closely on British practice, the custom of allowing questions on notice was soon adopted in the Legislative Council and has remained a prominent feature of its practices ever since.

In contrast, questions without notice are a relatively recent innovation in the Victorian Parliament. Questions without notice are again modelled loosely on Westminster practice, however in the House of Commons Members wishing to ask an oral question must give notice of their question beforehand. The closest equivalent at Westminster to the Legislative Council’s Question Time is Prime Minister’s Questions, Urgent Questions, and Supplementary Questions, which generally are questions asked on the floor of the House with either limited or no prior warning of the question. 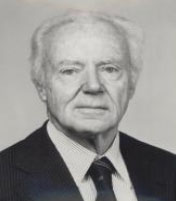 John Galbally, asked the first question in the Council.

Questions without notice were not formally introduced into the Legislative Council until 1976, when the Standing Orders were amended. The first question under these rules was asked on 27 April by John Galbally. While questions were asked occasionally before this time, this occurred only by leave of the House (in other words, only if the Minister concerned was prepared to allow the question to be asked).

The decision to amend the Standing Orders in 1976 to provide for a formal period of Question Time, arose from a decision by Victoria’s Legislative Assembly in 1969 to establish for the first time, a period of 45 minutes for questions without notice. Given there were fewer Ministers in the Council, it was considered that a ten minute period was a sufficient period for asking questions. This period was extended to fifteen minutes in 1979 and to twenty minutes in 1980. In the 58th Parliament, Sessional Orders (these expire with the Parliament) were introduced to permit nine questions from non-Government Members only. The Council’s Standing Orders no longer prescribe a set period of time for questions without notice. Currently, the Council’s practice is for 10 questions to be asked each sitting day, which usually means five questions are asked by Government Members and five questions are asked by non-Government Members.

The focus of attention 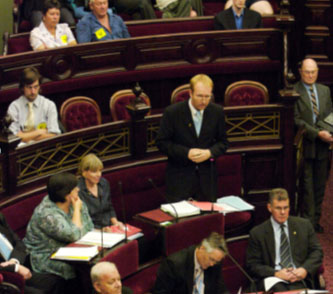 Question Time usually attracts greater media and public attention than any other part of the Legislative Council’s sitting day. It is also one of the few occasions each day when all Members, particularly Ministers, are likely to be present in the Chamber (unless illness or urgent business intervenes). Under the Council’s Standing Orders, Question Time is scheduled to begin at 2.00 p.m. on Tuesday and 12.00 p.m. on Wednesday and Thursday.

Question Time’s significance lies partly in being a source of information which is supplied by the Government when Ministers answer questions. The period also attracts considerable interest because of the heightened partisanship and sense of ‘theatre’ which exist in the Chamber during its conduct. Question Time is a very clear example of the party-political contest in Parliament. The respective performances of the competing sides during Question Time help to influence their morale and the public’s perception of their capacity to govern.

Members ask questions without notice by rising in their place and obtaining the call of the Chair (the President). Allocation of the call is at the President’s discretion; nevertheless, in practice, the following usually occurs:

Admissibility of questions without notice 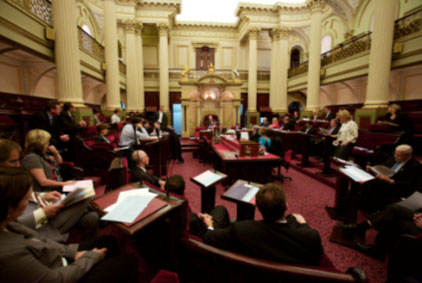 Questions must seek information or press for action in relation to matters with which Ministers are officially connected, to proceedings pending in the House or to any other issues within Ministers’ responsibilities. Standing Orders also allow questions to be directed to Ministers regarding matters for which they are representing an Assembly Minister.

The admissibility of a question without notice is determined solely by the President who is guided by the House’s Standing and Sessional Orders. Aside from the need for a question to be within a Minister’s responsibilities, other criteria should be satisfied. Included amongst these are the requirements that a question does not:

In broad terms, these rules are intended to ensure that questions do not raise inappropriate matters, unnecessary information or turn Question Time into a debate. Nevertheless, Presidents have traditionally interpreted these rules liberally in order to avoid an excessive number of questions being blocked.

The use of immediate supplementary questions, enabling a primary question to be followed by one or more questions stemming from a Minister’s answer(s), is a feature of Question Time in some Westminster-style legislatures. For example, such questions are common in both the United Kingdom’s House of Commons and the Australian Commonwealth Parliament’s Upper House, the Senate.

It is common in the Legislative Council (and other Australian legislatures) for Government backbenchers to ask Ministers pre-arranged questions during Question Time which are known as ‘Dorothy Dixers’. These questions are often prepared by Ministers (or their staff) and provide the Government with an opportunity to outline its policies or to criticise the Opposition.

Many regard the frequent use of ‘Dorothy Dixers’ as an undesirable aspect of the parliamentary process as it tends to weaken the Government’s accountability to Parliament during Question Time. Nevertheless, the Chair does not have the power to prevent such questions provided that they comply with the House’s rules.

Questions may be asked of private Members (Members of the Council who are not Ministers) concerning any Bill, motion or other matter connected with the Legislative Council’s business, of which the Member has charge. Nevertheless, such questions are rare: the overwhelming majority of questions are directed to Ministers. 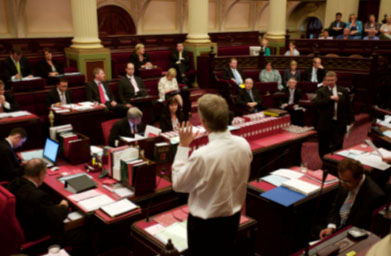 The Legislative Council’s rules and practices place far fewer conditions on answers than questions, which is common in Australian legislatures. In fact, Ministers are not obliged to answer questions at all, although the adoption of such an approach would attract unwanted publicity and criticism of the Government. Consequently, Ministers almost always offer a response of some kind to questions without notice.

When Ministers choose to answer a question they should not debate the matter to which the question pertains, nor should answers be used for making ministerial statements. Otherwise, provided that the Chair is satisfied that the answer is responsive to the question (and most Presidents have interpreted this leniently) and does not contain unparliamentary language, Ministers are free to answer in any manner that they choose. This includes the freedom to refuse to answer every detail the question raised.

In the 58th Parliament, a Sessional Order requiring all answers to questions without notice to be direct, factual, succinct and relevant was introduced. Along with this requirement, authority was given to the President to direct a Minister provide a written resopnse to a question without notice if the President determined that an answer was not responsive to the question. This Sessional Order was adopted into Standing Orders for the commencement of the 59th Parliament.

Time limits on questions and answers

Time limits in relation to questions and answers were first adopted by the Legislative Council in November 2001, and were later incorporated into the Standing Orders in 2006. The time limits in the Standing Orders for the asking of an initial and supplementary questions is one minute, and the time limit for answers is four minutes (in the current Sessional Orders this is three minutes) in relation to the initial question and one minute when answering supplementaries.

Questions on notice are written requests for information often requiring detailed responses concerning government administration. Provided that they are submitted by 2.00 p.m., they are normally placed on the Council’s Notice Paper for the next sitting day. Before this occurs, they are checked by the Clerks (on the President’s behalf) to ensure that they comply with the House’s rules.

Number of questions on notice

No limits are imposed on the number of questions Members may submit on either a daily or sessional basis. Consequently, Members sometimes table a series of questions on a particular matter which may add up to dozens or even hundreds of questions. 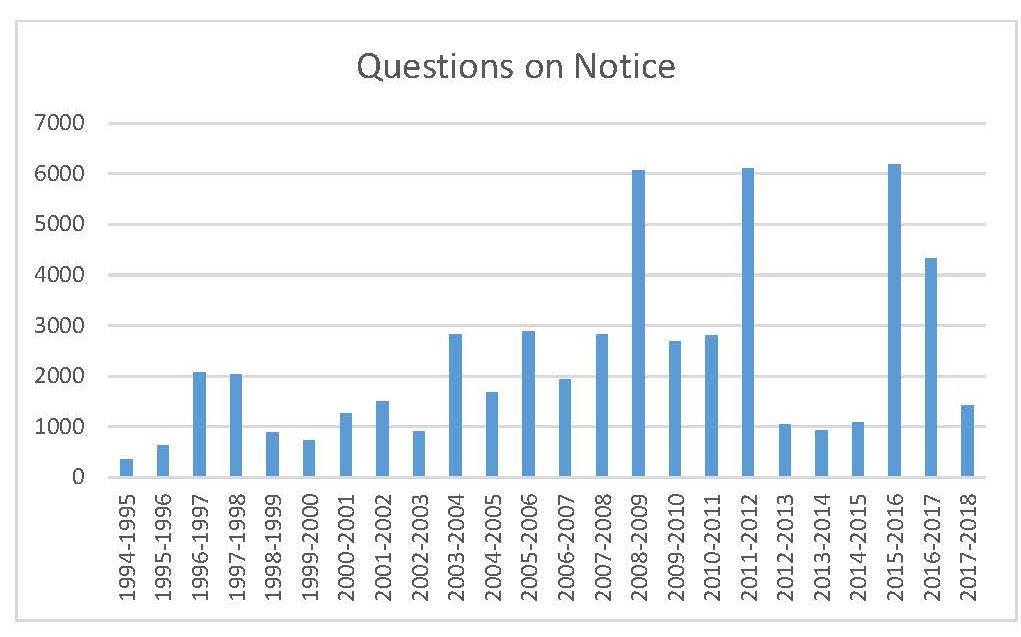 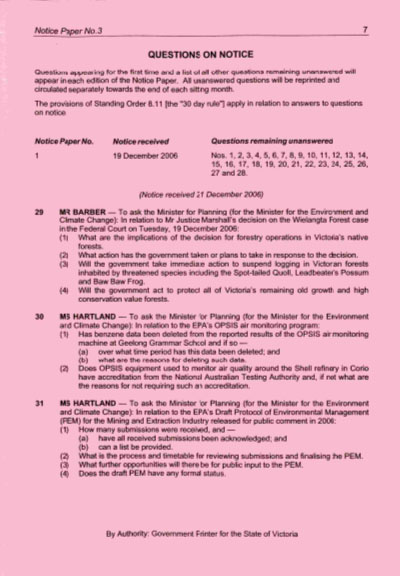 Ministers are obliged to answer a question on notice relevantly and within a reasonable time. However, under guidelines accepted by the House in 1993, this may not apply if:

If a question on notice does not seek information falling into one or more of these categories, a written response is normally prepared by officials within the Minister’s department. Once this has received the Minister’s imprimatur, the answer is tabled and a copy supplied to the Member concerned. Traditionally, answers to questions on notice have also been read out in the Chamber by the Minister after Question Time’s completion, but under the Council’s current Standing Orders it is only the numbers of the answers that are read out.

If a Minister does not supply an answer within thirty days, or offer an explanation within that period of the reasons for any delay, Standing Orders permit:

Prepared by: Table Office
Department of the Legislative Council
Parliament of Victoria