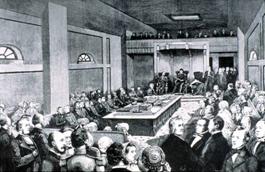 A meeting of the first Legislative Council, 1851

The region now known as Victoria was part of New South Wales until formal separation in 1851. The Act that established this separation also provided for a limited form of representative, self-government in the new colony. This occurred through the establishment of a Legislative Council (but not a Legislative Assembly) consisting of thirty Members, with twenty elected (only significant property owners being eligible to vote) and the remainder appointed by the Lieutenant-Governor (who was, in turn, a British appointee). Victoria 's Legislative Council first met in November 1851 at St Patrick's Hall, Melbourne.

The first Legislative Council served the colony for only five years but has been credited with having made at least three significant and lasting contributions to Victoria's parliamentary system:1

Establishment of responsible government in Victoria

Victoria 's Constitution was approved by the Legislative Council in March 1854 but was not officially proclaimed until 23 November 1855 after receiving Royal Assent in Britain. The Constitution introduced a Westminster-style system of responsible government that has remained in place ever since. Some of the main features of the system include:

The Victorian Parliament's first elections were conducted during the Spring of 1856 with the legislature's first meeting on 25 November 1856 . The new Legislative Council consisted of thirty Members representing six Provinces (each Province having five Members). From its first sitting, the Council adopted many of the rules and procedures of the British Parliament (with local variations shaped by past experience in Victoria 's first Legislative Council and New South Wales ' legislature) such as those governing debate and the passage of legislation.

A significant influence on the Legislative Council's composition and behaviour up to the middle of the twentieth century was its membership and voter qualifications, although their influence was greatest during the nineteenth century. These qualifications:

Since 1950 the right to be a voter or candidate in Council elections has been totally unhindered by property qualifications. This has been one of the factors that has resulted in considerable changes in the Council's composition. In 1856, the Council consisted almost exclusively of businessmen and pastoralists. By 1950, exactly half of the Council still had pastoral interests. In the present Council a much wider cross-section of society is represented with close to two-thirds drawn from backgrounds other than farming/pastoral or business.

The Legislative Council and obstruction

Victoria's Legislative Council earned a reputation during the nineteenth century as an obstructive, conservative institution prepared to frustrate governments by rejecting, amending or delaying legislation. Although this reputation has endured until the present day, it is now a far less accurate reflection of the Council.

Three of the major reasons for the Legislative Council's reputation for obstruction have been:

The Constitution gave the Council the power to reject money Bills but did not initially include provisions to deal with deadlocks when the two Houses could not reach a compromise on such matters. Although deadlock provisions were introduced in 1903 and 1937, they were cumbersome and, therefore, ineffective.

The Council used its power to block Supply on five occasions in the nineteenth century (1865, three times in 1867 and in 1877) and a further five times in the twentieth century, the last occasion in 1952 when the Labor Party and disaffected Liberals in the Upper House combined to block the appropriation Bills of a Country Party Government. Thus, it is over half a century since the Council last blocked Supply.

By blocking Supply, and denying the Government the funds required to govern, the Council had the power to force a general election on occasions. The Legislative Council's incentive to exercise such power was diminished by constitutional reforms in 1984 which were supported by all political parties represented in the Parliament. These reforms established four year terms for the Legislative Assembly, with the first three years being fixed. Although the Legislative Council retained the power to force a Government to a general election within the first three years of its term, this could only occur if the Council rejected a Bill dealing solely with appropriations for the ordinary annual services of Government.

2. The Legislative Council's tendency to block other legislation

A second cause of the Council's reputation for obstruction is also associated with practices more of the past than the present. The Council blocked a great deal of legislation in the nineteenth century. It has been estimated that between 1856 and 1901 the Council rejected or postponed 9 per cent of all Bills sent to it by the Legislative Assembly.2 A significant proportion of these Bills involved politically and socially progressive legislation such as:

The Legislative Council of more recent times has been a significantly less conservative, more progressive institution and less likely to block Government legislation. For example, throughout the 56th Parliament (19 December 2006 to 7 October 2010), the House dealt with 368 Bills, and rejected only 9 of these. Four of those rejected were Private Members Bills. Significantly, this was a Parliament in which the Government did not have a majority in the Council.

3. The Legislative Council's reluctance to reform itself

Until recently, this has been a more persistent feature of the Council's history. There were a number of fundamental powers that the Council was unwilling to relinquish. These included its indissolubility and its power to block money bills (or any other legislation).

Nevertheless, over the years the Council did accept some reforms of itself, even if these occurred slowly and/or reluctantly. A number of these have been noted previously, including the abolition of various voter/membership qualifications. Other prominent changes related to the number of Legislative Council Provinces, Members and the length of their terms. For example, the number of Members has been as high as 48 (1889-1904) and as low as 30 (1856-1881), while Members' terms were initially ten years, reduced to six years in 1881, then increased to eight years as part of the constitutional reforms of 1984, and again reduced to four years in the constitutional reforms of 2003.

The most comprehensive reforms of the Legislative Council occurred as a result of the Constitution (Parliamentary Reform) Act 2003 . Under changes introduced by this Act, the Council has lost the power to block Supply. Although the Council may scrutinise appropriation Bills, if it does not pass such a Bill within one month of the Assembly having done so, the Bill is automatically presented to the Governor for formal assent.

The impact on a government of the Legislative Council rejecting key elements of its legislative program has been further reduced through the dispute resolution processes introduced by the Act. After each State election a Dispute Resolution Committee will be established consisting of Members from both Houses and of differing political allegiances. It is the role of this Committee to resolve deadlocks resulting from the Legislative Council's failure to pass non-appropriation bills. If the Committee is unsuccessful, other mechanisms are in place to overcome a deadlock including, ultimately, a joint sitting of Parliament where the Bill can be passed by a majority of the total number of Members of both Houses.

Other changes established by the Act (which were approved by the Legislative Council on 27 March 2003 ) include:

Full details regarding the changes included in the Constitution (Parliamentary Reform) Act 2003 can be found in Information Sheet No.16: A New Electoral System for Victoria 's Legislative Council.