Summary: Bills are proposed laws which Parliament considers. They contain various elements. Understanding those elements will help you interpret the bill. This fact sheet explains these elements with examples, and sets out practical information about bills and Acts generally.

The Victorian Parliament considers many bills each year. Bills are debated in both Houses and certain aspects are also considered by the Scrutiny of Acts and Regulations Committee.

Bills are made public at the second reading stage. Organisations and the public then have the chance to put their views to the minister and members generally.

Sources of information about bills

The minister's second reading speech, statement of compatibility and debates recorded by Hansard give you more information about each bill.

See Hansard for debates on bills.

The Scrutiny of Acts and Regulations Committee also reports on bills, focusing on rights and freedoms rather than policy.

Media reports can also give background information and context.

We explain the major elements of bills below.

(1) The explanatory memorandum explains each clause in numerical order. It appears at the front of the printed bill, but is not formally part of the bill.

(2) All Victorian Acts referred to are printed in bold. In this case the bill refers to a 'Principal Act'. The purpose of all bills is to introduce new legislation, either to amend an existing Act or to create a completely new Act. When a bill amends existing legislation, the main Act it affects is often defined as the 'Principal Act'. This term is then used throughout the text. It is also confirmed in the bill itself, normally in clause 3.

(3) The footer at the bottom of the page is simply a reference and does not form part of the text. It states the print version (see Print Versions) and the date of printing. 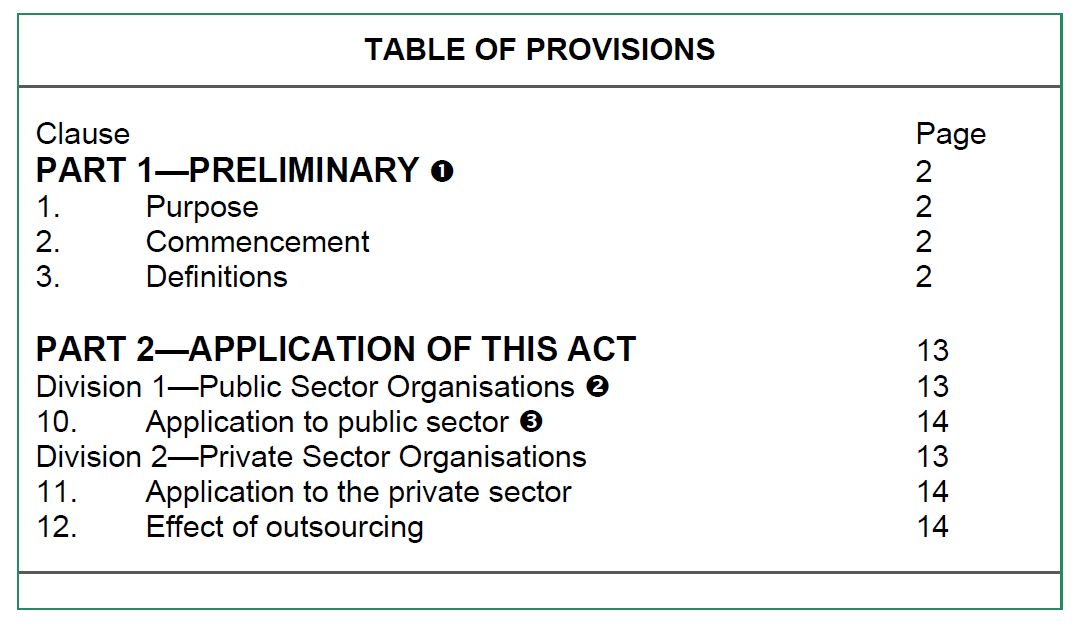 (1) Every bill has a formal structure and, for ease of reading and interpretation, is divided into a number of elements. In a very long bill, the text is divided into chapters.

More commonly there will be separate parts to a bill. Each part deals with a different aspect of the bill's subject matter. The table of provisions lists each part's title and its contents.

(2) A part may be split into divisions and, sometimes, subdivisions. These are listed in the table of provisions.

(3) The clause title is the most frequently referred to element of a bill. Shorter bills only contain clauses without the need for separate parts. Clauses are numbered consecutively and each has a title. See Clauses later in this fact sheet.

The introduction print is the first version of the bill. It is kept confidential until the minister sponsoring the bill moves that it 'be now read a second time'. Paper copies are then available and the version is released on our website. 'Introduction Print' appears at the top of the explanatory memorandum.

The House the bill was introduced in is shown at the top of the first page of the bill. If the bill is not a government bill, the name of the member introducing it is also shown here.

If the first House to consider the bill amends it, we print a new version. We incorporate the amendments into the original bill and it becomes the amended print version for the second House to use. This version also appears on our website.

The first page of the bill shows the date it was amended. In the example above, it is 28 November 2007.

You will also find what print version a bill is, in its footer.

Short titles appear on the first page of the bill. Examples are Freedom of Information Amendment Bill 2007 and Victorian Energy Efficiency Target Bill 2007.

Before September 1985, the short titles were included in one of the initial clauses in the bill. Today, they are the title of the bill.

From 2007, short titles include 'Bill' rather than 'Act'. However, when the bill becomes an Act, the word 'Bill' is changed to 'Act'.

The long title is a brief summary of the scope of the bill. This long title is for the first bill shown under 'Short titles' above:

A Bill for an Act to amend the Freedom of Information Act 1982, the Ombudsman Act 1973, the Victorian Civil and Administrative Tribunal Act 1998 and for other purposes.

The sponsoring minister uses the long title when introducing the bill. At that time, the bill is still confidential and not released publicly.

A preamble is an optional preliminary statement in a bill that is used occasionally. It gives reasons for the legislation, explains the context and clarifies its scope. For example, preambles have been used to explain the history of a Melbourne public park, and to formally state that Parliament recognises principles of non-violence.

A preamble is much less detailed than an explanatory memorandum but, unlike the memorandum, it is part of the bill. It can be used to help interpret the eventual Act if anything is not clear. When used, you will find it immediately after the long title. 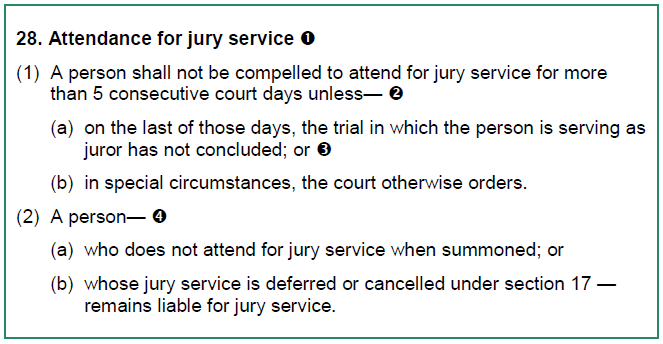 (1) Bills are divided into numbered clauses, allowing for convenient reference.

Clauses are numbered consecutively throughout the whole bill. The above example shows clause 28. Clauses may be grouped into chapters, parts, divisions and subdivisions. Each clause has a title, which for bills passed after 1 January 2001, is part of the ultimate Act. Once a bill becomes an Act, clauses are known as sections.

(2) Clauses may be divided into subclauses. Subclause 1 is shown here. When a bill becomes an Act, subclauses are known as subsections.

(3) Subclauses can be divided into subparagraphs. The above example shows subparagraphs (a) and (b). This terminology is the same in a bill and an Act. 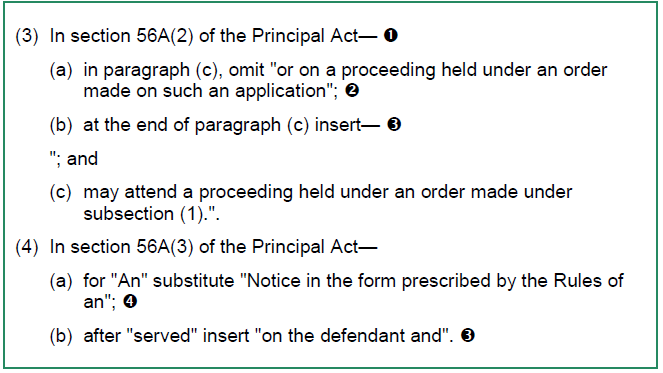 There are a number of ways in which a bill can amend existing legislation. These examples set out the most common methods. It is also possible for provisions to be repealed.

(1) The bill states the amendment's location in the Principal Act.

(2) Words may be deleted. All those words are enclosed in quotation marks.

(3) Text may also be inserted. Anything from an additional word to complete sections, or even parts, may be added. Again, quotation marks are used.

(4) Words may be substituted. In these cases, existing text is deleted and replaced with new wording. Both the wording to be deleted and the text replacing it appear in quotation marks.

Clause 1 of all bills drafted since September 1985 sets out the bill's purposes. The clause can help you interpret the eventual Act.

(1) Since September 1985, clause 2 is usually the commencement clause. It sets out details of when the Act will start operating. Even though an Act is law at the date of royal assent, that does not mean that all its provisions will begin at that time. Normally they will begin at a later date. It is common for different sections of the bill to come into operation at different times.

(2) A bill often states that clause 2 comes into operation the day after it receives royal assent. In this example, it specifies that Part 12 will come into operation on that day.

(3) Often, provisions will not come into effect until they are proclaimed. The Governor makes these proclamations. They are legal documents specifying the date(s) of operation and are published in the Government Gazette. The Governor may make several proclamations for one Act over time, with different sections commencing at different times. For a helpful summary of commencement dates, see 'Legislative Information' > 'Commencement Information Acts' on the Victorian Legislation and Parliamentary Documents  website.

(4) In recent years, bills have an automatic commencement date which comes into effect if there is no proclamation. In this example, that date is 1 January 2008.

Side notes, sometimes known as historical or marginal notes, tell you about the history of an existing Act which is mentioned in a bill. Here, the history is about the Magistrates' Court Act 1989. The note gives a history of the individual section.

The example side note confirms that the Act was reprinted in July 1999. A reprint was necessary to include amendments. It then lists the amending Acts applicable since the reprint.

Finally, the note cites the Law Today website, for viewing the Acts online. 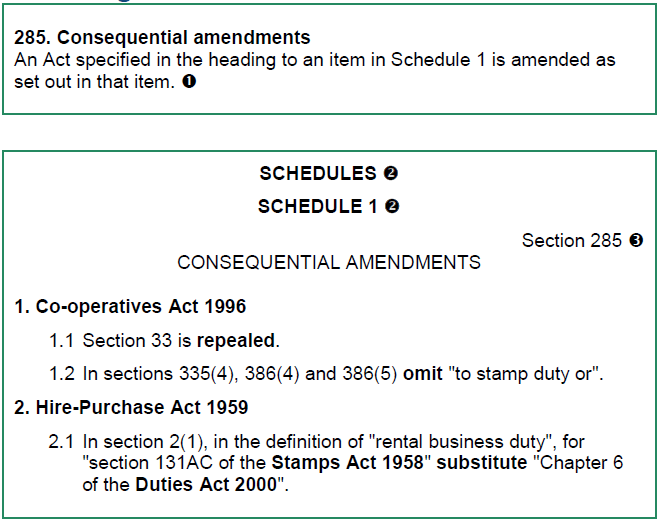 (1) Bill schedules must be connected to a clause within the bill. The schedule depends on that clause and, if the clause is removed, the schedule cannot be considered. This example shows a reference to a schedule which lists a number of consequential amendments to existing Acts.

(2) Schedules appear after all the clauses, under the main heading 'Schedules'. If there is more than one schedule, they are numbered. Some matters are more suitable in a schedule than in a clause. Apart from the example shown, other common uses are to include rules, maps, forms and fee scales.

(3) The relevant clause is referred to at the top right of the text for easy reference.

Endnotes, while more common in Acts than bills, are sometimes used to give more information, especially for complicated bills. In Acts, endnotes also include the date of the second reading speeches and the long title. The long title is not printed at the start of an Act.

An index is not part of a bill but is a useful tool in searching for a particular subject. As the same index is printed in the Act, it refers to 'sections' rather than 'clauses'. Indexes are normally included in larger bills, except those that are purely amending bills.