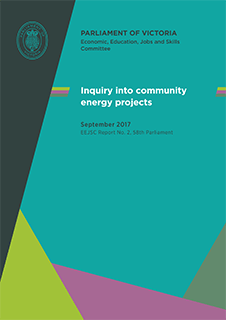 The Government response to this report was tabled in Parliament on 8 March 2018.

Received from the Legislative Assembly on 23 June 2016:

To the Economic, Education, Jobs and Skills Committee, for consideration and report no later than 1 July 2017*, into supporting the role of communities in the Victorian energy economy and, in undertaking the inquiry, the Committee should

* the reporting date was extended to 31 October 2017 by resolution of the Legislative Assembly on 20 June 2017.