Skip to content
You are here: Home > Public Accounts and Estimates > Inquiry into Financial and Performance Outcomes 2011-12

Inquiry into Financial and Performance Outcomes 2011-12

In relation to its Inquiry into the Financial and Performance Outcomes for 2011-12, the Public Accounts and Estimates Committee sent out questionnaires to the Victorian Auditor-General's Office and the Department of Treasury and Finance in relation to the Annual Financial Report. The information provided in response to this questionnaire is crucial for the Committee in preparing its report.

Department of Treasury and Finance

The Public Accounts and Estimates Committee has commenced its Inquiry into the Financial and Performance Outcomes for 2011-12. This inquiry is part of the Committee’s ongoing Parliamentary responsibilities for scrutinising and reporting on financial management in Victoria. As part of this inquiry, on 30 November 2012 the Committee sent out questionnaires to departments and nominated agencies. The information provided in response to this questionnaire is crucial for the Committee in preparing its report.

Subsequent clarification questions were sent to some departments and are also listed below.

Department of Business and Innovation


Department of Premier and Cabinet


Department of Sustainability and Environment


Department of Treasury and Finance

Inquiries into Financial and Performance Outcomes

The Committee's overall objective of reviewing financial and performance outcomes is to provide the Parliament and the community with meaningful information about results achieved compared to expectations, and so assist in the process of making informed assessments about the content of public accounts and achievement against planned priorities.

The Committee will consider making recommendations about the form and content of the annual accounts, financial papers and annual reports as well as about specific outcomes judged, where appropriate, against performance objectives and planned priorities.

The inquiry has an important role in examining public accounts to seek improved performance and accountability of government departments and agencies to Parliament and the community for the money raised and spent each year.

In appreciating the importance of evaluating program outcomes on an ongoing basis to assess whether planned objectives and outcomes are being achieved, the Committee maintains that the concept of outcome evaluation is primarily a role for departments and agencies to foster as part of formulating policy and performing their governance role.

With this background in mind, the Committee's outcomes inquiry does not propose to examine impacts at a micro level but intends to provide information at a macro level that will be useful to program administrators at a policy and operational level for the purposes of :

The estimates process and the examination of outcomes

A financial and performance outcome is defined as a result that has been achieved, in any given financial year, either in a financial or performance context, from an activity funded by the Parliament.

These outcomes are recorded in the public accounts of departments and agencies which are formally audited by the Auditor-General.

The Committee's inquiry analyses the public accounts and related financial and performance information contained in a range of documents that include:

The inquiry looks at public expenditure against the expressed purposes of government for that expenditure as contained in documents tabled in Parliament as well as in public policy statements.

The scope of the Committee's inquiry remains within the context of accepted government policy. The Committee does not generally seek to explore alternative policy questions or to compare fiscal outcomes against other policy contexts.

Performance is measured against:

The Government response to the Report on the 2011-12 Financial and Performance Outcomes was received on the 30th October 2013. 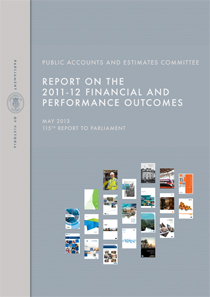 The Public Accounts and Estimates Committee tabled its