Skip to content
You are here: Home > Law Reform > Inquiry into Vexatious Litigants 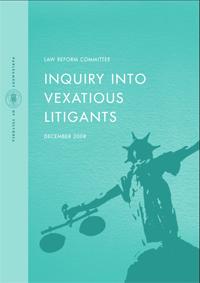 The Committee tabled its final report in Parliament on 4 December 2008. The Committee made 32 recommendations aimed at preventing and managing vexatious litigants in the justice system where possible, and restricting access to the courts only in serious cases. The report is

If you would like a hard copy of the report, or if you have any other questions relating to the inquiry, please contact the Committee on (03) 8682 2851 or vplrc@parliament.vic.gov.au.

Referred by the Legislative Assembly on 1 March 2007.

The Chair of the Committee Mr Johan Scheffer MLC said that, “access to the courts is an important part of Victoria’s democracy. But a minority of people repeatedly bring legal proceedings that have no merit. Sometimes they sue different people. Sometimes they sue the same people over the same issues again and again.”

“Victoria introduced specific laws to deal with vexatious litigants in 1928. The Supreme Court can make an order stopping a vexatious litigant from continuing or commencing legal proceedings without leave. This power has been used only 15 times in Victoria in the last 80 years.”

“Some other states and territories have reformed their vexatious litigant laws in recent years,” Mr Scheffer said. “Yet the Committee found there was very little available information about vexatious litigants, how many there are in Victoria’s justice system and why they start to behave this way.”

“Many participants told the Committee there are relatively few people who might be called vexatious litigants in Victoria, but they can have a significant financial and emotional impact on people they come into contact with,” Mr Scheffer said.

“The Committee found current laws have not always dealt with the problem effectively. They are seen as a drastic sanction of last resort reserved for the most extreme cases. They are rarely used and, even when they are used, they do not stop vexatious litigants in every case.”

The Committee made 32 recommendations aimed at preventing and managing vexatious litigants in the justice system where possible, and restricting access to the courts only in serious cases. They include:

“The Committee has tried to strike a fair balance between democratic rights of access to the courts, and the need to protect the justice system and members of the community from repeated unmeritorious litigation,” Mr Scheffer said.

The Victorian Government has six months to table its response to the Committee’s recommendations in the Parliament.

The Chair of the Committee Mr Johan Scheffer MLC said that, “The right of people to go to court is important in a democratic society like Victoria, but some people appear to abuse this right.”

“Only 14 people have been declared vexatious litigants in Victoria since the laws were introduced,” Mr Scheffer said.

“Some other states and territories have changed their laws in recent years so the Committee's inquiry is timely.”

“The Committee will also be looking at ways to enable the courts to perform their role more efficiently and effectively, while at the same time preserving the community's general right of access to Victoria's courts.”

The Committee has released an issues paper for public comment.

“The Committee wants to hear from people who have dealt with vexatious litigants, or have an interest in these issues,” Mr Scheffer said.

The closing date for submissions to the Committee is 27 June 2008 . The Committee is due to table its final report in the Parliament by 4 December 2008 .

The following submissions were accepted by the Law Reform Committee:

This inquiry is complete. No further submissions will be accepted.